I’m going to babble in a non-review capacity for a moment. Feel free to ignore this post if this isn’t what you’re here for.

I was entrusted, some months ago, with the care of a small child of five years. While this may sound like a wildly bad idea, given that I’m the kind of person who is frivolous enough to keep a blog about Nintendo games and irresponsible enough to fail at updating it for months at a time, I’m actually generally competent and qualified to care for children, having successfully assisted in the upbringing of my three younger siblings.

Upon acquiring the basic necessities of child-care (gummi candies, blankies and coffee), I broached the subject of entertainment. “She loves video games,” her mother assured me, “just hand her a controller to mess with while you’re playing and she won’t know the difference.”

If there’s one thing I’ve learned, it’s that children know the difference. I remember being a child and having such transparent deceptions foisted upon me. Being a human being, though, I had a certain recognition of cause and effect – I knew that if I hit a button and nothing happened, probably that button did nothing (at least at that moment). I knew that if I hit a button and something happened, the real test was whether that phenomenon repeated consistently – if so, the button did that thing. Even in my youth, prior to the dissipation of my childhood amnesia, I know that the patterns and colors on the screen were not so cacophotous as to leave me unable to interpret them. The fact is, her mother assumed this would work because she had not actually tried it.

So, in my attempt to entertain the child in a manner that did not involve literally running up and down the street in an endless series of races wherein my big, lumbering adultness was, perhaps, my greatest liability (damn you, square-cube law!), I tried cracking out some video games and, against the mother’s advice, decided that I would practice no deception – she and she alone would control the screen! After all, when I was her age, I was rocking some mad Atari 2600 action. Surely, the children of this generation are likewise prepared to play games!

Yes, but are the games prepared to be played by children?

I popped “A Boy and His Blob” into my Wii, thinking that any game with a superfluous hug button would be a good start for the child. What I did not anticipate, however, was how difficult it is for small fingers to keep track of so many buttons. Try as I may, I could not get her to keep her little hands in the optimum position for playing the game.

Let’s look at why. This is a Wii-Mote with nunchuck:

This is a Wii Classic Controller:

This is the first joystick I ever played a game on, the Atari 2600 video joystick: 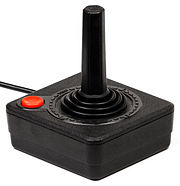 And this is the controller first game system I fell in love with – the NES: 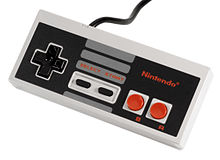 Point being, over the history of gaming there has been a growing trend of adding buttons, motion controls and other such oddities to the standard controllers. This is not, in and of itself, a bad thing per se, after all, the more buttons that are on a given controller, the more opportunity there is for designers and programmers to map those buttons to actions in the game. It does, however, often result in the inclusion of superfluous buttons for simpler games.

Back in the Atari 2600 days, there was a deficit of buttons, and programmers were forced to use creative methods of mapping addition commands. In the game Defender II, for instance, the player had both bombs and lasers, but only one button. The solution was, therefore, to make it so that if the button was pressed while your ship was in the right spot, a bomb would deploy. A simple context-specific result effectively transformed one button into two. The Atari game Star Raiders had a touch pad you plugged into the other controller port to allow for additional commands. Clever. In the Atari’s Raiders of the Lost Ark, two controllers were used, one to control inventory, and the other to control Dr. Indiana Jones. Awkward, but functional. I seem to recall there being a special controller that added, perhaps through some arcane arts, a second button, but I never owned such black magic. Point being, one button was clearly not enough.
The Nintendo, likewise, was forced to use tricks when mapping additional buttons. Many players from my era will recall games where holding up or down while hitting a button gives it a completely different function, or where both start and select were used to access in-game actions rather than merely as menu selection and pause buttons. This was not nearly so common as back in the Atari 2600 days when it was difficult to allow the player to do more than on thing at all.
It still wasn’t enough, though – as time went on, with each new console, more buttons – and sometimes even additional control pads – were added. The early first-person shooter game Doom, for example, was available for the PC, the SNES and the N64. The PC version had, naturally, no lack of buttons for the commands – most keyboards at the time had over 100, at least 80-some of which would be in functional familiar positions. The SNES version was, by way of contrast, awkward, requiring the player to toggle through their entire inventory of guns rather than selecting them with a single keypress. Doom 64 was still behind the PC version, but did a considerably better job of giving the player more of the functionality of the PC version even if their controller came from a parallel world where people have three hands.
The N64 was, in my humble opinion, the first console system that was actually equipped to provide a satisfying FPS experience (as evidenced by the popularity of 007: Golden Eye). Still, its button selection was not, perhaps, ideal. The Gamecube added two more buttons (or removed two buttons and added a d-pad, depending on how you interpreted the N64 controller), and the threshold of comfort was reached.
…for adults who have been playing games their entire life. What I’ve discovered, though, is that these controllers are, in many cases, a confusing amalgam of buttons and triggers for those who have not, in fact, spent their formative years being eased into additional buttons. I don’t mean to make a mountain of a molehill here, but I know that at my house, there was one frustrated little girl who would have been far better off with an Atari 2600 that she could actually play than the Wii some five systems generations more advanced.
But this isn’t a big deal – fact is, kids aren’t dumb and video games are fun. Sure, she couldn’t figure out the WiiMote/Nunchuck combo in the fifteen minutes we tried it, but given time she would have adjusted and learned the complex control scheme. Still, the encounter did bring to mind the simpler era of my childhood, back when putting four buttons directly on the controller was mindblowingly revolutionary.

This site uses Akismet to reduce spam. Learn how your comment data is processed.