Although Mario and Luigi are naught but lowly plumbers by trade, they have well proved themselves renaissance men, having dabbled in such vocations as pest control, demolitions, and sports refereeing, to say nothing of their racing careers, ghost hunting expeditions, biohazard cleanup services and their disastrous forays into the hospitality industry and private education.

When it comes down to it, though, their most successful gigs have been in relation to the rescue of damsels in distress (DID for those of you in the biz). Today, I’d like to identify and examine the damsels of distress within the Mario franchise.

First up, chronologically speaking, is Pauline. As previously mentioned, Pauline was originally supposed to be Olive Oyle, the Popeye the Sailor character. She was hastily changed, however, when Miyamoto was unable to secure the rights to the popular cartoon sailor (who will no doubt be loved and remembered long after Mario and Donkey Kong fade into obscurity).

Since work on the game began well before it was determined that the rights would never be secured, a lot of the art and gameplay elements already present had to be salvaged, including and especially the game’s damsel-in-distress. A bit of MSPaint Magic can reveal the similarities:

Obviously that girl on the left is Pauline, and the one on the right is my interpretation of what she would have looked like as Olive Oyle. (This isn’t a Popeye blog, so if you want more information on Olive Oyle, you’ll have to look elsewhere.) You can sort of see how the artist had wanted the character to look originally, and if you take a look at a picture of Olive Oyle, you can tell that he did a pretty good job of getting the basic physical structure right.

When the rights to Popeye couldn’t be acquired, the new design for the character was determined by Nintendo’s art department, who produced art for the character which the pixel artists then painstakingly translated to an image for the game. The amazingly accurate result of that process can be seen below:

Wait… wat? THAT’s Pauline? That’s the damsel-in-distress in Donkey Kong? Look, Miyamoto, far be it for me to question you and your multibillion dollar magical gaming empire of glory, but don’t you think you could put a little more effort into making the in-game art and the promotional material look the same? Let’s give it a shot, shall we:

Wow. That was easy! And the final outcome is graphically recognizable as Pauline while remaining very similar to the original! Why didn’t Nintendo do that? How the hell did they get that pink lady there? I haven’t a clue, but do you know who she makes me think of? A different Mario damsel in distress: Princess Peach, who looks like this:

The resemblance is strong. A few quick hair and dress color changes and some accessories, and we’ve got our girl:

Of course, Princess Peach first makes her appearance as Princess Toadstool of the Mushroom Kingdom (later revealed to be a title of nobility rather than a name); she looks like this in Super Mario Bros:

What?! THAT is princess Peach? Wait a minute. Weren’t there THREE super mario games, all of which involved Princess Toadstool aka Princess Peach? Let’s see how she changed over time:

Yeah, it’s not even debatable: the woman Mario encounters in Super Mario Bros. I, II & III has dark hair and eyes, unlike the very blonde-haired-blue-eyed Princess Peach. On closer inspection, she seems to have a tan for Mario 1, lost weight and developed derpy eyes in Mario two, and contracted a serious case of conjunctivitis in Mario 3. Truly a dynamic character!

Incidentally, now that I see them side-by-side, they make me think of yet another Mario damsel in distress: the dark-haired Princess Daisy  of Sarasaland who debuted in Super Mario Land for the original GameBoy. She looks like this (Toadstool Princesses included for comparison): 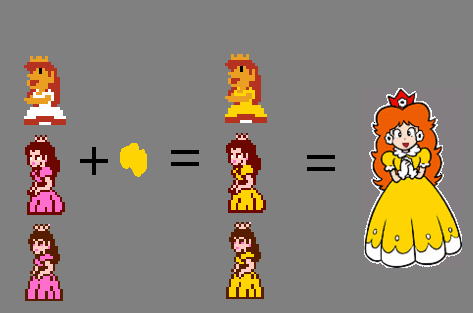 And like this in-game:
Let’s face it, the gameboy wasn’t good at these sorts of things, but it’s neither hard to see what they could be going for nor the fact that Princess Toadstool, as portrayed in Marios I, II & III is more Daisy than Peach. At least the GameBoy version is potentially consistent with the box and promotional art. One can only imagine the resemblance would be more obvious if the miracle of color have been available on hand-held devices when this game was released.

Oh wait! I forgot: if you play an original GameBoy game on a GameBoy Color (or Advance, if that’s what you have), it automatically adds color! Now we can see how Daisy was intended to look in-game:

Wait a minute… doesn’t that sort of look like…

There you have it: every damsel that Mario rescues is apparently a different one in-game. I’d like to think, though, that there’s a logical explanation for this. Perhaps Mario is just too busy saving princesses to even notice which one he’s trying to rescue today (which is kind of admirable in its dedication, really). Maybe Bowser, Tatanga and Donkey Kong have some sort of prisoner exchange program of which Mario remains unaware. Perhaps they simply have a serial-killer-esque fetish for dying their victim’s hair and making them change into different dresses, in which case I feel even better about rescuing them.

Who knows, and who can hope to keep it all straight? Certainly not Shigeru Miyamoto – he’s just here to design the characters.

This site uses Akismet to reduce spam. Learn how your comment data is processed.